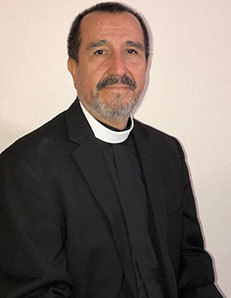 The Rev. Jorge Enrique Pallares, Canon for Congregational Life at Christ Church Cathedral in Hartford, is a native of Mexico and has been an ordained Episcopal priest since 2006.

He grew up in the Roman Catholic Church and became attracted to the Anglican church in 1996 following a trip to California with his family.  He and his family became members of the San Jorge Anglican Parish in Mexico City.  Before entering the priesthood, he spent 23 years in Mexico as a civil engineer in his own company and others, working on construction, design and supervision of roads and varied types of construction.  He also was a teacher of mathematics and a high school principal.

After earning his civil engineering degree from the Autonomous University in Puebla, Mexico, he studied business administration, marketing and other subjects at the University of Las Americas, Cholula Puebla Campus.

He began his studies in theology in 2001 at the Anglican Seminary of San Andres and the Theological Community in Mexico City, earning both a bachelor’s degree in theology and a diploma in pastoral psychology with honors.  He was ordained a transitory deacon in 2006 at Christ Church Parish in the Anglican Diocese of Mexico and later that year was ordained a priest.  In 2007 he was priest-in-charge of a new mission in the state of Puebla, restoring the Anglican church there for the first time in many decades.

After serving two years in the Diocese of Mexico, he was invited to serve in the Episcopal Diocese of Los Angeles where he has been since 2008, serving in various parishes.   He has become an American citizen.  Before coming to Christ Church Cathedral, he was rector of St. Simon’s Episcopal Church in San Fernando City.

To a cathedral dedicated to serving the pastoral needs of a diverse urban community he brings broad experience in both secular and religious areas as well as bilingual skills.

Canon Pallares has three adult daughters, Carolina from his first marriage, and Mariana and Patricia with his wife Rosa.  His wife was a professional technician in social work in Mexico and in California was a registered assistant nurse.

In accepting the call to Christ Church Cathedral, Canon Pallares noted he felt the need to serve people seeking new horizons. “Trusting in God, in the love of my wife and daughters, and in the fellowship of the clergy and laity of the Episcopal Church in Connecticut, I hope to serve in humbleness but with passion, having in my mind and heart the Lord’s command to serve lovingly to all his children, my brothers and sisters in Christ.”