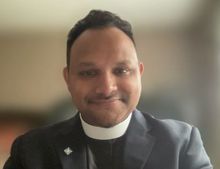 The Rev. Ranjit K. Mathews serves as the Canon for Mission Advocacy, Racial Justice, and Reconciliation in the Episcopal Church in Connecticut. He works with parish and diocesan leadership to make real God’s realm of justice, love, and peace, with a focus on ECCT’s commitment to dismantle racism and white supremacy in our nation and in our church.

Ranjit graduated from The George Washington University with a Bachelor’s in Business Administration, and from Union Theological Seminary with a Master’s in Divinity with a focus on Contextual Theology.

Prior to his work with the churchwide office, the Rev. Mathews was associate rector of St. Luke’s Episcopal Church in Long Beach, California, a bilingual parish where he worked to build connections between the English-speaking and Spanish-speaking community members and led the youth group. Before that he was a Lecturer in Theology at the Msalato Theological College of St. John’s University in Tanzania as a member of The Episcopal Church’s Mission Volunteer program, and served as assistant rector of St. Michael’s Episcopal Church in Milton, Massachusetts.

Before becoming Canon in the ECCT, Ranjit served as the rector of St. James Episcopal Church in New London, CT. He was recently appointed the secretary of the Social Justice and International Policy Legislative Committee for the House of Deputies, and is Chair of the interim Task Force of Dialogue with South Sudanese Anglicans living in the diaspora.

Ranjit lives with his spouse, Johanna, their two boys, Dhruv and Kabir, and their dog, Samara in Rocky Hill, CT. He grew up in the Boston area and considers New England home. Ranjit loves national and local politics, pop culture, hip-hop, sports, and being out in creation. His pronouns are he/him. Ranjit can be reached at [email protected] or via phone at (203) 639-3501 ext. 115