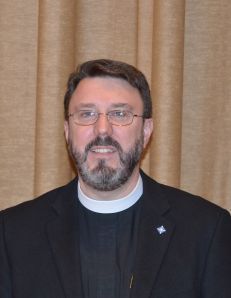 Jay is a graduate of Boston College with a Bachelor of Science degree in chemistry and a minor in theology. He began the process of ordination in the Diocese of Southern Ohio after graduating with a Master of Divinity from Princeton Theological Seminary. During this process, he completed a Clinical Pastoral Education internship and then residency at Children’s Hospital Medical Center in Cincinnati, Ohio. He and his wife then moved to Connecticut where Jay worked as a hospital chaplain while attending Yale Divinity School. He received a Master of Sacred Theology from Yale Divinity School and Certificate of Anglican Studies from Berkeley Divinity School in 1997. He was ordained to the transitional diaconate in June 1998 and as a priest in January 1999. After serving in parish ministry at St. Mary’s Episcopal Church in Manchester and St. John’s Episcopal Church in Essex, Jay felt called back to hospital chaplaincy. He worked at Bridgeport Hospital for over nine years as a chaplain and prepared to become a Supervisor in the Association for Clinical Pastoral Education, Inc. (ACPE). Jay became a board- certified chaplain in the Association of Professional Chaplains in 2003 and an ACPE Supervisor in May 2007. In 2011, he left Bridgeport Hospital to become the Director of Pastoral Services at Hartford Hospital. Jay left Hartford Hospital in 2015 and has gone on to supervise units of CPE at Griffin Hospital in Derby, Connecticut. Jay and his wife, Judith, a pastor in the United Church of Christ, live in Killingworth, Connecticut, with their son, Jamie, and dog, Humphrey.